Eight go on an Adventure to Lymington Summer Regatta

Over the weekend of 2-3 July, a few of the OSC Improvers were assisted and strongly encouraged by Adrian and Fen, to have a go in our first sea regatta. Of course, we had to endure the complicated logistics and loading arrangements of getting 5 boats on 2 double-stack trailers plus a roof rack thanks Ashley and Nick for help on this, plus Alex for lending his Laser.

No hotels but hard-core camping with a real fire and lots of meat, courtesy of Aussie chef David. Looking at the faces around the campfire, there was a growing sense of fear as we contemplated what was in store for us next day with wind conditions at our upper limits, and tides and ferries to add to the mix.

Saturday dawned and after a hearty breakfast from Chef David's "Eski" cool box, and much bimbling, we were finally ready. Setting off into the Solent for the first time, and for 5 hours, is a sobering experience and we were each to be blooded in our own separate way.

On returning to shore, we dissected the day's events over a beer and bbq at the amazing Lymington Town Sailing Club house. David looked pretty shell shocked. Tess was similar. Tom and Rob had done more swimming than sailing in the 505. Jonny and Russ in the RAF Laser 2000 had actually managed pretty well but were now distracted by the Football against Ukraine. The big surprise was that Adrian and Fen had also spent time tasting the Solent water. Not sure whose legs those are disappearing over the side of the RS800 in the pic

After an early bed, and a rainy night, we woke early with incredible enthusiasm to get back on the waterwell, erm we needed a lot of positive thinking and self determination to do it all over again. The wind looked to be stronger especially later but out we all went. The 505 capsized within minutes as it passed through the swirling air behind the Isle of Wight ferry; however, Tom and Rob kept it upright for two good races and even got the spinnaker up without issues (which was a first!). Jonny and Russ were going really well and were focused on prizes in the Laser 2000. Tess (see photo) finally got sorted in her laser by borrowing an Olympian's kicker (any autographs Tess?), and Chef David had never gone so fast in a laser as the wind got right up. 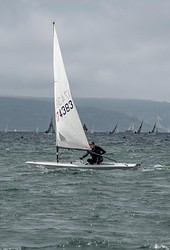 So back on dry land there was much to celebrate. Jonny and Russ got third in the Medium Handicap in the Laser 2000 but sadly no prizes (aw!). What we all walked away with was a great feeling of accomplishment, from being taken out of right our comfort zones Farmoor will never feel quite the same again after this! More important though was the sense of fun, support and encouragement we all gave each other. Finally, none of this would have happened without Adrian and Fen stretching and developing our skills while building our confidence along the way.